Everyone knows that in order to visit the Uffizi Galleries have to wait long queues.
This is because only small groups of visitors can enter, to not spoil the magnificent works kept in the museum.
If you do not want to do long queues under the Tuscan's sun or the bitter cold of Florence, you can buy tickets in advance, paying only a small fee.
The tickets will be delivered by email also on your smartphone, so when you will get to Florence, you will only have to arrive a few minutes before the booked time and visit the Uffizi Gallery.

florence.net is a "gift" to the well known museum we are not the official site and we haven't got connection to the Uffizi Gallery or other museums.

If you buy the tickets, you will have:
Skip the Line
Printed or mobile voucher accepted
Audio Guide/Headphones available
Safe date change 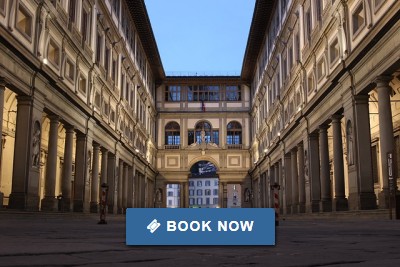 Enjoy your visit with our Guided Tour of Uffizi Gallery, Admire some of the most renowned works by Cimabue, Giotto, Masaccio, Botticelli, Leonardo da Vinci, Michelangelo, Raphael and many others with the help of a professional Guide

The Uffizi Gallery is a prominent art museum located adjacent to the Piazza della Signoria in the Historic Centre of Florence in the region of Tuscany, Italy. One of the most important Italian museums, and the most visited, it is also one of the largest and best known in the world, and holds a collection of priceless works, particularly from the period of the Italian Renaissance.

After the ruling house of Medici died out, their art collections were gifted to the city of Florence under the famous Patto di famiglia negotiated by Anna Maria Luisa, the last Medici heiress. The Uffizi is one of the first modern museums. The gallery had been open to visitors by request since the sixteenth century, and in 1765 it was officially opened to the public, formally becoming a museum in 1865.

Today, the Uffizi is one of the most popular tourist attractions of Florence. The Uffizi hosted over two million visitors in 2016, making it the most visited art gallary in Italy. In high season (particularly in July), waiting times can be up to five hours. Tickets are available on-line in advance, however, to significantly reduce the waiting time. The museum is being renovated to more than double the number of rooms used to display artwork.

Why you should book your ticket on florence.net

Avoid the long queue at the ticket office.

We will send you and email with the voucher or you can just use your phone.

Book you audioguide (or video guide) with your tickets

All transaction are made on high protected bank system with SSL.